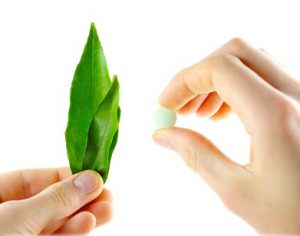 If the doctor tells you that he has diagnosed cancer, then this is an incisive event for everyone. What to do now? Conventional treatment, i.e. chemotherapy, radiation, surgery or hormone therapy, depending on the severity and stage of the disease? Or alternative medicine, be it homeopathy, acupuncture, dietary change (dietetics), other approaches such as methods of traditional Chinese medicine, electro-carcinoma therapy, pseudo-natural therapies such as amygdalin therapy, gemstone therapy or coffee enemas – or perhaps completely offside methods such as using pendulums, mental healing, Reiki? Or is cancer a consequence of unresolved conflicts?
All this and much more has been and is used by cancer patients.

Anyone who undergoes conventional therapy with cancer is highly likely to live longer than if he or she were treated with alternative medicine. This conclusion can be drawn from a paper that researchers at Yale University in New Haven (Connecticut, USA) have now published [1].

Skyler B. Johnson and his colleagues searched the U.S. Cancer Registry for patients with breast, prostate, lung or colon cancer, the most common types of cancer, and – instead of conventional treatment – underwent “other unproven cancer therapies performed by non-medical personnel”, preferring some form of alternative medicine. 281 patients were found and, for comparison, twice the number of patients who had undergone conventional therapy with the same diagnosis and other conditions (age, sex, income, etc.) were sought. Patients whose tumors had already metastasized, in whom the cancer had reached the final stage or in whom the data were unclear were not considered.

The results are sobering for the followers of alternative medicine, as the following graph, calculated from the data of the study, shows. Here the number of deaths in both treatment groups is listed, the data for conventionally treated patients were also converted to 280 initial participants. Blue dots should represent 10 living patients, red dots 10 deceased: 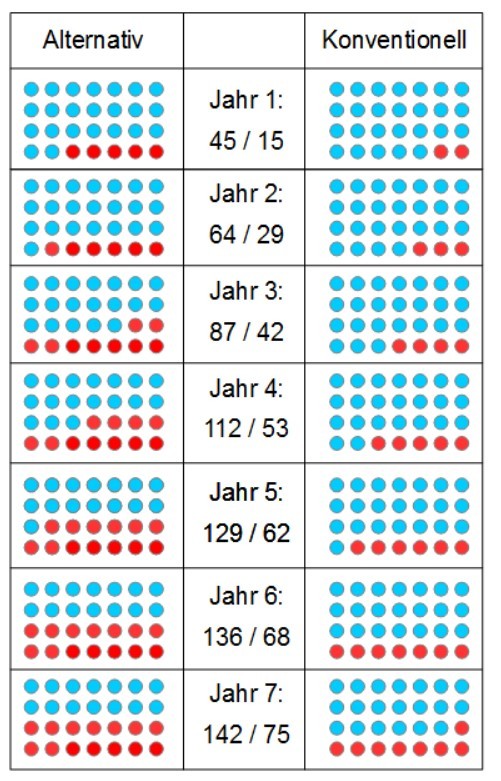 It is obvious that at any time the number of deaths under alternative therapy is about twice as high as in conventionally treated people. After seven years, about half of the patients had died under the alternative therapy, while only a quarter had died under the conventional therapy. Depending on the type of cancer, the difference was even more pronounced: In breast cancer, the risk of death was five times higher with alternative medical therapy and four times higher with colorectal cancer than with conventional treatment.

A small but significant side consideration:

Let’s put ourselves in the time frame after seven years. Of the 280 patients originally treated as alternatives, 138 are still alive – although 67 more in the case of conventionally treated patients, namely 205. We can expect that the 138 alternative patients will probably swear by the fact that alternative medicine has helped them, that they are happy to have renounced the “evil” orthodox medicine, are convinced that this is the only way they can defeat their cancer without the assassination attempts “Big Pharma”. This can be exploited in a media-effective way and posted on the practice pages of the respective therapists as a victory message.

However, none of the 67 who died too early compared to conventional therapy will be able to tell their story. For example, what it feels like to go to a real doctor shortly before the end and then come to the conclusion that the prospects for a few more years of life would not have been bad at all if you had only come earlier. Since these 67 nameless patients, whose premature deaths can only be recorded statistically, or their surviving dependants do not present themselves in a closed talk show, they can be dismissed as regrettable individual cases. After all, deaths also occur with conventional therapies. The premature death of these people remains largely unknown to the outside world.

Even more: Looking into the future and counting the trends further into the future, there will continue to be relatively more deaths in the “alternative medicine” treated group, due to the late effects of an untimely or completely omitted effective therapy. In purely mathematical terms, this would mean that in the 13th year after the start of therapy, all “alternative” treated patients would have died, while a good half – around 140 – of conventionally treated patients would still be alive.

In this context, one inevitably remembers Steve Jobs, the legendary Apple boss, who still had time to recognize his mistake of trusting in alternative medical treatment – but not enough time to correct it. His biographer reports how important it was for Jobs to communicate this to the general public. Jobs explained his mistake with the sentence: “I think if you just don’t want to admit something, don’t acknowledge that it exists, then you can fall into “magical thinking”. Not a lack of intelligence, but a lack of rationality.

Although the researchers were unable to separate the individual alternative medical therapies on the basis of the statistical data collected, it can be assumed that the difference is not significant. They were all procedures that were similar in that they had no evidence of efficacy.

When transferring the results to the totality of all cancer patients, it may be necessary to make certain limitations, since some important influencing variables were not recorded. However, the group data tend to point in a different direction, with patients of alternative therapies being younger, more affluent, better educated and less burdened with additional diseases, but also in a later stage of cancer. So it may not always be the case that almost a quarter of patients in alternative medicine die prematurely within seven years, but the trend is unlikely to be reversed.

A decision for alternative medicine in an existing cancer diagnosis could therefore turn out to be a big mistake.

Many thanks to Udo Endruscheit and Natalie Grams for their good contributions.

One Reply to “Study uncovers: With alternative medicine many cancer patients die earlier than necessary!”