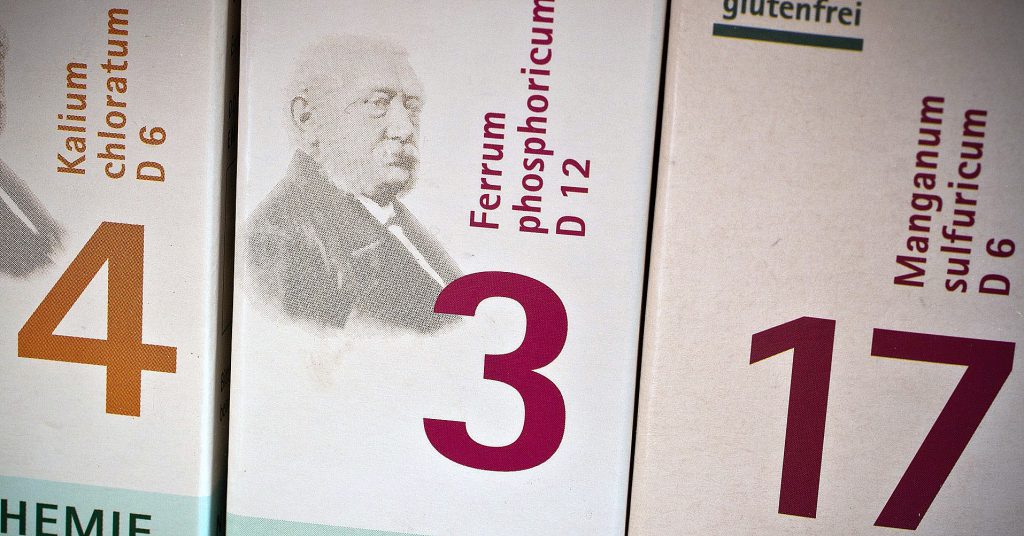 The so-called “Schuessler salts” are often equated or confused with homeopathy. However, they do not go back to Hahnemann, but to the Oldenburg physician Wilhelm Heinrich Schüßler (1821 to 1898).

Schüßler can easily be described as a “dazzling figure” of his time. Actually a secretary by profession, from 1849 he taught foreign languages. Although he had not passed his high school diploma, he had the opportunity to begin medical studies in Paris, which he continued in Berlin and Giessen. His doctorate was also somewhat unusual. Since he pretended to be called up shortly as a military doctor, the university did without a dissertation and only held an examination interview and (after all, one was in Prussia) the examination fees were charged.

Only when Schüßler wanted to take the medical state examination, which was a prerequisite for the granting of the regular license to practise medicine, the lack of the Abitur became a problem. The administrative authority did not accept this any longer and demanded that the examination had to made up for. It was at first in 1857 that he was able to take the medical state examination. This examination was a somewhat mediocre success for him, but he passed and was able to settle as a doctor in his home town of Oldenburg in January 1858. For this, however, he needed a municipal concession, which he received only because he undertook to work exclusively as a homeopathic physician.

He had some success with the practice, probably due to the fact that he demanded very low fees. In other sources it is said that he had given away the required homeopathic remedies free of charge. Three years after his establishment, in 1861, he joined the “Centralverein homöopathischer Ärzte” (Central Association of Homeopathic Doctors).

In the first 15 years of his practice he developed a shortened form of homeopathy, which he presented in 1873 in the memorandum “Eine abgekürzte Therapie gegründet auf Histologie und Cellularpathologie” (“An abbreviated therapy based on histology and cellular pathology”). He called his form of therapy the “Biochemical Healing Method”. The basic assumption of this therapy is that diseases are caused solely by disturbances of the mineral balance in the body cells and thus disturb the entire metabolism.

Analogous to homeopathy, the salts were diluted in powers of ten (but not ritually “potentised” in the homeopathic sense), because only in this way could the “ions” penetrate directly into the interior of the cell according to Schüßler’s ideas. This was to be supplemented by a special diet, which was to eliminate the mineral deficiencies outside the cell, in order to establish the balance between the inside and the outside of the cell. Schüßler believed that a pathogenic (disease-related) stimulus would stimulate the individual cells to such an extent that, in the defence reaction, such energy would be expended that the cell would use up its mineral reserves.

Schüßler reduced the more than thousand homeopathic remedies known at the time to 12 functional remedies. In his opinion, this should be the mineral salts that would remain when human body tissue is ashed.

Whereby Schüßler himself removed the calcium sulphate from the list in 1895. In its place sodium phosphate and Silicea should be used.
At the beginning of the 20th century, Schüßler’s exegetes added 15 supplements to these original 11 (resp. 12) salts, and later seven “biochemical agents”.

Although Schüßler produced his salts by potentiation, he strongly distinguished himself from homeopathy, as he rejected Samuel Hahnemann’s principle of similarity for his “biochemical healing method” in favour of physiological-chemical processes in the body (this idea was indeed a step away from Hahnemann’s vitalist-esoteric assumptions of a “deranged vital force” in the direction of natural science, but pure speculation and a complete misinterpretation of cellular processes and their participation in disease processes). On this basis he denied the effectiveness of potentiated means propagated by Hahnemann. These statements were the basis for a long dispute with other homeopaths, which led to Schüßler’s resignation from the “Centralverein homöopathischer Ärzte” in 1876.

Wilhelm Schüßler based his diagnoses on the so-called “facial diagnosis”. He thus claimed that one could recognize the respective mineral deficiency by different signs in the face of a person. (A procedure that of course lacks any scientific basis – then as now.)

This “facial diagnosis” was further developed by Kurt Hickethier, a layman interested in alternative medicine, under the name “Sonnerschau” and is still used by alternative practitioners today.

Interestingly, the effectiveness of the Schüßler salts has never been scientifically investigated, let alone proven – in any case, there are no publications on the subject in the medical databases. The German consumer organisation “Stiftung Warentest” comes to the following conclusion in its publication “The Other Medicine”: Schüßler’s biochemistry is not suitable for the treatment of diseases.

More about Schüßler also on our Homöopedia (in German)

Picture by A_Different_Perspective on Pixabay