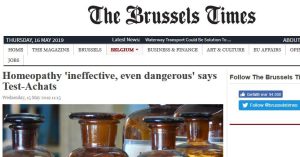 The Brussels Times reports under this title on 15 May 2019 and quotes Simon November, spokesman for the consumer protection organisation “Test Achats”:

“The requirements of effectiveness, safety and quality to bring a product to market and be allowed to use the name of medication are sadly not the same for all products,” commented Simon November, spokesperson for Test-Achats. “Homeopathic products are required to be accompanied by a minimum of documentation, and the working of the product barely has to be proven. And that, while classic medications have to go through an entire process of trials and study panels. We simply cannot accept that difference.”

The Brussels Times continues: “The organisation (Test Achats) describes homoeopathy as ‘quack medicine’, which would be bad enough if it only robbed the patient of money.  But there are conditions where the patient really has no time to lose on products whose effectiveness has not been demonstrated. People who are suffering from very real heart and vascular conditions should immediately seek treatment by a doctor, and with truly effective medication.”

Tell me about it. We also think that the criticism may have to focus even more on the danger potential of homeopathy. They are real dangers – but they rarely become visible and are therefore “out of mind”. The consequences and delays caused by homeopathic “therapies” are not recorded anywhere and ultimately virtually all end up in the case statistics – and deaths – of scientific medicine. There are very few reports about it. And in the famous case reports of the homoeopaths, with which they want to prove “evidence”, such cases are of course not to be found – only those are presented there that have recovered thanks to their self-healing powers and the natural course of the disease.

What is the general situation in Belgium, by the way?

The Federaal Kenniscentrum voor de Gezondheidszorg, the official health information service, has already stated in 2011 in a paper “State of affairs on Homeopathy in Belgium “ (Stand van zaken van de homeopathie in België):

“From a purely clinical point of view, there is no valid empirical evidence for the efficacy of homeopathy beyond the placebo effect.”

The Belgian skeptics “skepp” reported in detail on their website about this statement under the title “Homeopathy: geen bewijs dat het werkt en toch veel gebruikt” (“Homeopathy: No proof of an effect and still much used”).

It is up to the health insurance funds in Belgium (similar to the “statutory benefits” in Germany) whether they reimburse homeopathy or not. As you would expect, practically everyone does, with a view to the competition, which you just don’t want to give a marketing advantage to. However, there was a collapse of this front in Belgium last year: one of the major insurers announced that it would no longer cover homeopathy reimbursements.

For some time now, the therapeutic use of homeopathy in Belgium has only been reserved for “qualified” people. In 1999, homeopathy, acupuncture, chiropractic and osteopathy were considerably regulated by the so-called “Colla Law”. One may argue, however, whether it is the right way to persuade the therapists of these directions to found professional associations and to believe that this would suffice an already dubious quality aspect. But the actual aim was to prevent the practice of these forms of therapy by non-physician therapists. In fact, in 2014, a royal decree was added and the end of the non-medical practice of these therapies was sealed. The decree regulated

1. homeopathic therapists must be licensed doctors, dentists or midwives.

2. they must have a degree in homeopathy from an (official) university or college.

3. doctors, dentists and midwives may only use homeopathy for evidence-based indications.

Well, yeah. Let’s disregard the last point, which should actually mean the end of homeopathy, if you take it as it stands. Of course nobody does. (This does not mean, of course, that the indications must be evidence-based, but rather the therapies for the indications. But it is exactly written so in the original text.) Well-intentioned, but actually more than half-hearted, sometimes even nothing more than a appreciation of the sugar ball method – if such a regulation came into force in Germany, the Central Association of Homeopathic Physicians would probably celebrate longer…

No, a prerogative for physicians in homeopathy is not a solution at all. Such regulations arise from the illusion that there exists a “qualified” homeopathic therapy. The lever does not have to be applied to the group of persons exercising the method, but to the method itself, as is currently the case in Spain and France. And that is why we would like to thank the Belgian consumer protectors, who have taken just this approach with their recently published statement. Let us hope that in Belgium, too, there will be realised that homeopathy – no matter who is practising it – has no place in the qualified health care of the population.

And German health policy? Instead of attentively reflecting on developments in Europe – and worldwide – and questioning one’s own position, policy continues to hide behind the popularity-“argument”. However, we do not want to accuse health policymakers of not knowing that “popularity” is not a criterion for the validity of medical means and methods. But we criticize them for pretending to be. Belgium may be half-hearted as far as the official attitude to homeopathy is concerned, but Germany is at best chicken-hearted, if at all.