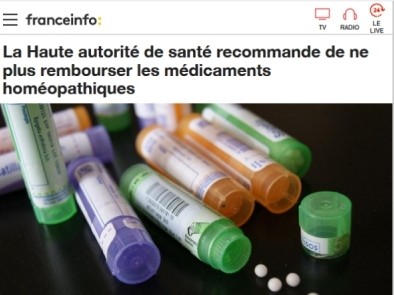 On several occasions we have reported on the progress of the critical debate on the role of homeopathy in the French health system. In almost breathtaking speed, a protest article of the group #NoFakeMed in Le Figaro has developed into a debate, which in the meantime has yielded statements of the supreme French Medical Association as well as the Academies of the Sciences of Medicine and Pharmacy (in a joint statement), all of which clearly position themselves against the role of homeopathy in the health care system and which have not been lacking in clarity about the unscientificness, ineffectiveness and possibly dangerousness of homeopathy.

The official statements had been requested by the French Minister of Health, Agnés Buzyn, who at the beginning of the debate had expressed herself somewhat nonchalantly ignorant about homeopathy (“if it helps to avoid toxic medicines…”). But then she had promised to follow the final statements of the chambers and academies and above all the recommendation of the highest French health authority, the HAS (Haute autorité de santé) in her final decision. Of course, Mrs. Buzyn played for time, involving all the authorities that could be found in France. But that didn’t quite work out. After little more than a year after the article in Le Figaro, the final opinion of the HAS is now available –  LeMonde reports..

And it’s devastating for homeopathy. Although the HAS speaks of a “disputed” effect of homeopathy, which is not comprehensible according to the statements of the two academies – but that may already be a politically shaded formula. However, the recommendation to Mrs Buzyn is clear: No more refunds for homeopathy in public health.

And the key sentence is unmistakable:

“No studies have demonstrated the superiority of the homeopathic approach in terms of efficacy (…) over conventional treatments or placebo.”

Mrs Buzyn’s decision will be made in June. Before that, the three major homeopathy producers in France, Boiron, Weleda and the lesser-known Lehning, still have the opportunity to bring counter-arguments. Lo and behold – the nagging has already begun. Boiron “beckons” with the loss of 1,000 jobs and the “marginal” costs – in the French cash register system recently 130 million euros annually – would not be of any significance in view of the fact that there are proper placebo effects for it after all… so at least franceinfo. We remind ourselves that nowhere was the cost factor decisive where homeopathy was given its farewell. Besides, we know The body itself can heal in many cases, the natural course of the disease usually also brings healing, placebo may have only a small part in all this, does not heal diseases – and is everywhere, where there is care and attention, completely free to have.

We do not believe that Boiron will be on the verge of ruin only because of the abolition of reimbursement by the social security system.

Be that as it may – it’s going to be exciting and the matter is just before the finish line in France. Let’s simply note that the 200-year-old business model of homeopathy is now falling victim to science and honesty, as it looks. After all, the facts are as indisputable as the existence of the phases of the moon.