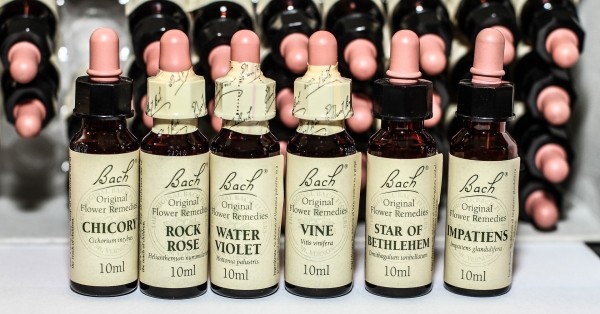 Edward Bach was a doctor from Birmingham, England, who studied medicine at the University College Hospital in London and graduated from Cambridge. Before he began his studies, however, he worked in the family brass foundry. Bach saw the source of diseases mainly in psychological causes or in the intestines.

After leaving some real clinical positions behind, he worked from 1918 at the London Homeopathic Hospital, which he left again in 1920 in favour of a private practice. One of his main areas in the Homeopathic Hospital was the extraction of so-called “nosodes”, which are homeopathic remedies obtained from pathological endogenous substances such as blood or pus.

In 1930, however, he closed his practice again in order to devote himself to observing nature and herbal medicine in Wales. Here his principle that illnesses are only the expression of a conflict between soul and mind became firmly established. On 27 November 1936 Bach, just 50 years old, died of heart failure.

The system Bach came up with is relatively simple. He took a mental misfeeling, such as “mental stress and tension” and assigned him a plant essence. This plant essence in turn should harmonize the vibrations of the patient with the cosmic energy field through its vibrations and thus heal the disease. Bach put together a total of 37 flower essences as well as an essence from rock spring water and a combination of five essences, which is probably the best known product under the term “Rescue remedy”.

The selection of plants for the negative mental states was purely intuitive, with Bach assuming that a divine inspiration guided him in his selection. However, the main criterion for selection was that the plants correspond with the concept of archetypes in the sense of Carl Gustav Jung. The flower essences still bear English names today, as a kind of homage to their inventor.

At the beginning of the production of its essences Bach used only the dew that was on the flowers of each plant at sunrise. The morning sun, which shone through dew and blossom, was to enrich the water with the vibrations of the plant. Thus, as in homeopathy, the assumed healing power is based on the non-existent water memory. As his flower essences became more and more successful, Bach was no longer able to meet the demand with dew drops alone and devised two other ways of preparing the essences.

The first of these is the so-called “sun method”, in which the freshly picked flowers are placed in about half a litre of water and stand in the blazing sun for three to four hours. In Bach’s imagination the vibrations of the plants are transferred to the water as healing energy. This part of the production is strongly ritualized by Bach’s regulations. So the plants have to be collected before nine o’clock in the morning on a sunny and cloudless day. The places where the plants have to be picked are also specified.

After these three to four hours the treated water is diluted 1:1 with 40% alcohol (formerly brandy or cognac). This is for conservation purposes. This mixture is now the mother tincture, which must be diluted again in the ratio 1:240 with alcohol in order to produce the “effective” essences. The end user must dilute the essence again in water in order to take it.

The second method is the so-called “cooking method”, in which the plants do not stand in the sun but emit their vibrations during a 30-minute cooking process. The further treatment is then the same. This method is usually only used for very woody plants or for autumn and winter bloomers.

Bach flowers are not only available as drops, but also as ointments, sweets, chewing gums, globules, teas, sprays, etc. There are also Bach flowers for animals. The classic dosage form, however, is that of the “stockbottles” with a content of 10 ml.

The “right” essence can be found by going to a Bach flower consultant or a non-medical practitioner, swinging out the essences yourself, using a guidebook or selecting the plants purely intuitively on the basis of their appearance.

Bach died in 1936 and his doctrine was forgotten. It was not until the great esoteric wave of the 1970s that it became known again. Since then, several clinical studies have been carried out, but none of them have shown any effect.

Today, flower mixtures are also offered which are outside the canon of Edward Bach. Special attention was given, for example, to an essence that should be used in the case of child abuse. After strong protests, this essence was taken off the market. With homeopathy they have only the magic thinking in common – but they are often confused or equated with it and are considered “particularly natural or vegetable”. Especially esoteric would be more appropriate.

We find it particularly problematic that Bach’s remedies are mainly used for psychological complaints (e.g. anxiety, loneliness, panic attacks, examination anxiety, trauma, depression, weariness, thoughts of death) and can thus delay or even prevent necessary psychological or psychiatric therapies. Moreover, their widespread and uncritical use conveys that for such serious diagnoses it is sufficient to take “a few little blossoms” and everything is fine again.