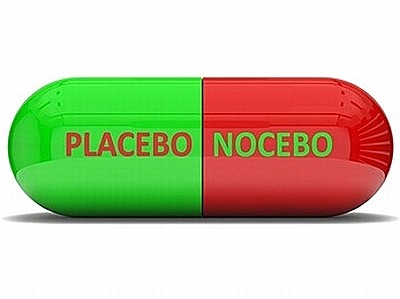 On this page you will find various information about the placebo effect, which explain that it is effective with any kind of attention – and therefore, of course, even more so with medical interventions. Furthermore, it is explained that homeopathy, like other pseudomedical procedures, sucks its honey partly from this effect instead of showing an own specific effect. Which – contrary to many a claim – not does help her to a place in scientific medicine.

This must be supplemented by a few remarks on the Nocebo effect. What does this mean?

There is a “counterpart” to the placebo effect: the nocebo effect. Placebo researchers even occasionally talk about the “side effect” of the placebo effect, but this does not quite hit the nail on the head. The mechanisms are the same, yes, placebo and nocebo are a sole phenomena. Only the effects of Nocebo are, so to speak, the “dark side” of the placebo effect, the negative mirror image. The differentiation between placebo and nocebo is thus only due to human perception and evaluation (similar to effects vs. side effects of drugs, which also is an evaluation system based purely on the utility or harm value in humans).

It is obvious that negative expectations can lead to a worsening of the patient’s condition – in the sense of a placebo effect with a negative sign. A good physician should take this into account in the same way as the placebo effect. Who does not know the “fear of the package insert”, which unfortunately causes a basic distrust of the prescribed medication in many people and thus often noticeably impairs its effect? The same applies in hospital if – what should not happen! – the patient is simply presented with his pill glass without being told what it is all about – the nocebo effect lurks. Especially if someone is already conditioned by pseudomedical “wisdom” to reservations about “conventional medicine”, which can very well have a negative effect on the effect of a finally inevitable medical treatment. It has also been proven many times that such an attitude leads to a lack of compliance – basically nothing more than an effect of Nocebo.

One of the most impressive examples of a nocebo effect is a study that was conducted with considerable effort and methodically correct in the USA a few years ago: The question was whether prayers can help in the recovery process. Patients who had undergone bypass surgery were divided into groups, one of whom knew that they were being prayed for and the other did not. This study showed a clear result: the group that knew they were prayed for clearly showed more complications and worse outcomes during convalescence. Quite obviously a Nocebo effect, which was certainly due to the – conscious or unconscious – assumption of the patients that it must be quite bad for them if they are prayed for …

Conclusion: placebo and nocebo effects are both important aspects that the responsible physician must always take into account. However, they are not a cheap alibi for the “effectiveness” of pseudomedical methods that cannot offer their own specific effects.

When trying to justify “placebo” as an independent medical intervention, it is repeatedly forgotten that placebo is neither predictable nor targeted. Main thing: placebo! Would the advocates of this view see it the same way when expecting nocebo effects? Especially since it depends on the situation and the patient whether a certain intervention has placebo or nocebo effects.